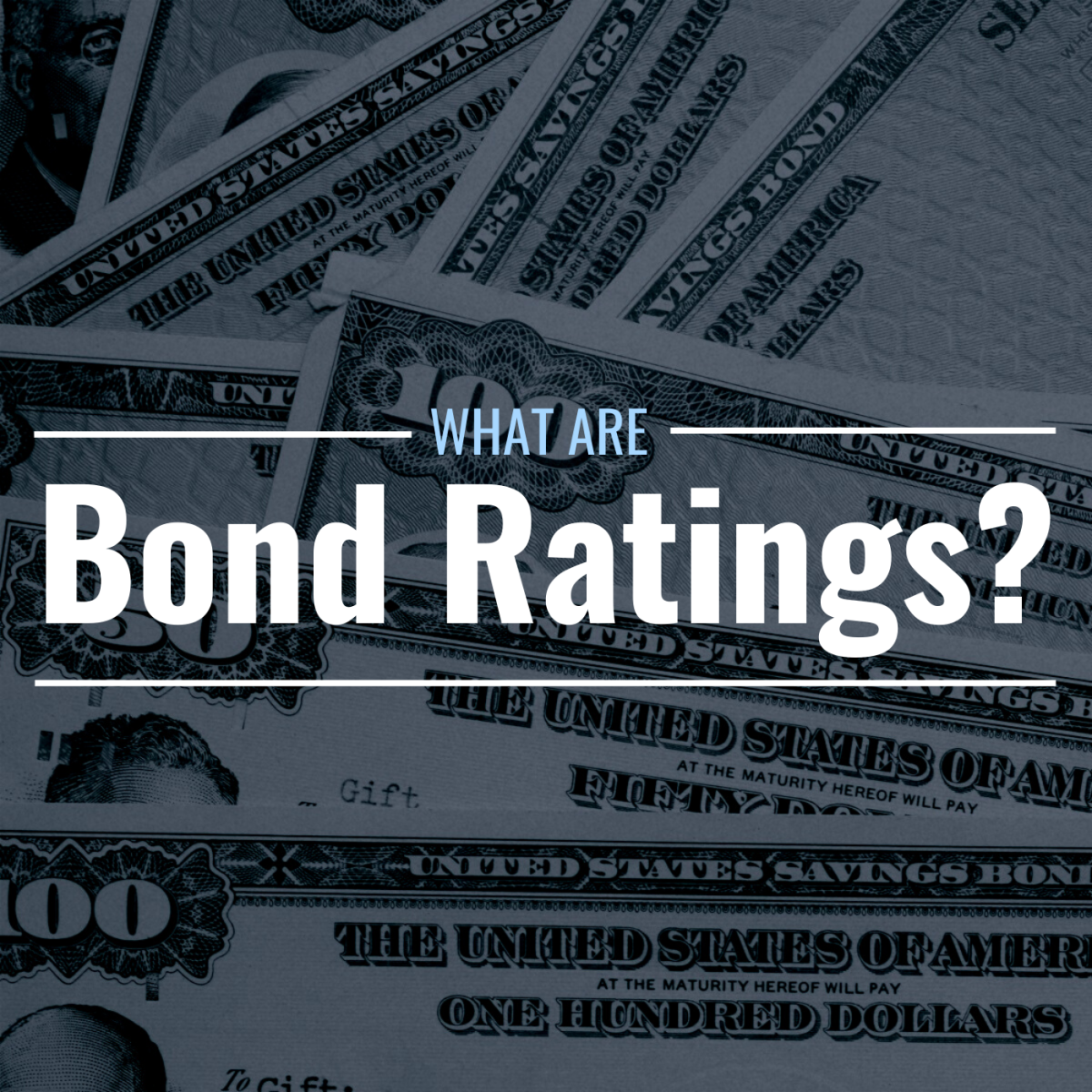 What are Bond ratings?

A bond is a loan provided by an investor to a company or government entity. In return for their investment, the bondholder expects the principal or investment amount to be repaid, plus interest, which is known as the coupon. The longer the investment period or the more risky the company they are lending money to, the more interest the bondholder will receive.

But how do investors know how risky a bond is? All bonds receive a financial rating in the form of a letter grade. This demonstrates creditworthiness, telling investors how likely the bond is to be repaid by its issuer. This way, investors know how much risk they are taking before they make their investment.

What do bond rating agencies do?

To help investors understand the creditworthiness of bonds, private rating agencies, such as Standard & Poor’s, Moody’s, and Fitch Ratings, perform an assessment of the bond issuer at the time the bond is issued. They assess the issuer’s ability and willingness to make all payments in full and on time. Each agency has its own rating system, but all use standard scales and are considered reliable sources.

What are Bond ratings?

Bond rating agencies publish their ratings in an easy-to-understand rating system, which includes the grade and level of risk:

US Treasuries It has an AAA rating and is considered the safest bond because it is backed by the “full faith and credit” of the US government, which is virtually guaranteed to never default.

An AAA rating is rare in the corporate world. In the 1980s, there were dozens of companies with AAA-rated bonds, but in order to boost profits, many assumed greater debt through acquisitions and acquisitions, and their bond ratings fell.

What bond ratings are investment grade?

How is bond rating calculated?

Rating agencies analyze companies’ financial statements in order to assess their credit quality. The metrics they use are proprietary, but some of the factors they may take into account in their statistical analysis include:

Do bond ratings change over time?

UPS bonds, for example, were rated AAA in the early 2000s, but after the company reached a long-term agreement with union workers that raised wages and benefits but froze pension obligations, credit rating agencies downgraded The company is ranked AA.

In response to the downgrade, UPS raised its bond yields by about 0.5%, which investors don’t seem to mind. In fact, these days, with very few companies receiving the coveted AAA rating, the cuts aren’t as damaging to the company’s reputation as it once was.

Why are bond ratings important to investors?

Bond ratings are an important way for investors to understand the risks they are exposed to when they invest in bonds. It alerts them to the quality of the bond — and why the bond might offer a high return. Bond ratings give investors an easy way to gauge the investment worth of a bond.

Are Bonds a Safe Haven for Investors in 2022?

Dan Weil of TheStreet.com advocates for a cause Buy bonds this year – and hold them to maturity.

Lowe’s comp (a little) – Get a free report It unveiled a new $15 billion stock buyback plan on Wednesday, while confirming full-year earnings targets, ahead of its annual investor event in New York.

Lowe’s, which posted better-than-expected third-quarter earnings thanks to higher home improvement demand, said it has approved a new $15 billion buyback that adds to the previous program’s balance of $6.4 billion as of Dec. 6.

The group also confirmed its full-year earnings targets, which include earnings of $13.65 to $13.80 per share and revenue in the region of $97 billion and $98 billion. Lowes said same-store sales will be either flat or down 1% from 2021 levels.

“We’re building on our momentum with the next chapter of Total Home’s strategy, designed to strengthen our multi-channel capabilities and position Lowe’s as a one-stop-shop for DIY and Pro customers to get everything they need on all of their projects,” CEO Marvin Ellison. “We remain committed to our best-in-class capital allocation strategy, which centers around investing in our strategic growth requirements, enhancing returns and delivering long-term shareholder value.”

Lowe’s shares were down 0.05% in pre-market trading to indicate Wednesday’s opening bell price of $201.85 per share.

Last month, Lowe’s adjusted earnings for the three months ended Oct. 28 were reported at $3.27 per share, up 13.5% from the year-ago period and strongly beating Street expectations of $3.10 per share.

The update came after better-than-expected third-quarter earnings from its larger competitor, Home Depot (HD) – Get a free reportwhich has benefited from a new wave of rebuilding projects, as well as rising prices, amid a broader downturn in the US housing market.

Home Depot expects to see “mid single digit” earnings growth for the full 2022 fiscal year, which ends in January, similar sales growth of about 3% and operating margins of about 15.4%.

© Reuters. FILE PHOTO: The Barclays logo appears in front of the stock chart shown in this illustration taken on June 21, 2017. REUTERS/Dado Rovik/Illustration/File Photo

Corey replaces Mark Ashton Rigby, who will be stepping down and advising the Bank on a part-time basis.

Corey had headed the lender’s retail banking and payments business and will be replaced in that role by Wim Maru, who joins from Lloyds Banking Group (LON:).

Changes come at a time when Barclays (LON:) “The executive committee of senior managers has gained prominence in the bank’s management, while Venkatakrishnan is being treated for cancer.

The chief executive, known within the British bank as Venkat, said last month that he would undergo 12-16 weeks of treatment for non-Hodgkin lymphoma, but that his prognosis was good.

Currie, the new chief operating officer, will, in addition to this role, run BX, the bank’s name for his company-wide company that provides technology and other support services to all parts of the business.

Technology has made our lives increasingly more convenient.

How many phone numbers do you know off the top of your head?

Probably not much, since our phone technology has eliminated the need to keep track of all those numbers.

But progress has a cost, and for most modern technologies, the cost is either your privacy or your security.

Apple has undoubtedly been one of the biggest players in the transition to the digital age. The iPhone revolutionized mobile phones and the company has been in the fashion industry for decades now.

But a device the company is making designed to allow its users to maintain accurate GPS tracking of their items could also be used to go after victims, according to a class action lawsuit filed this week.

A Texas woman and a New York woman sought testimony in a class action lawsuit in San Francisco on Monday seeking unspecified damages from Apple for stalking incidents they say were made possible by AirTags.

One woman said her ex-boyfriend placed the tiny tracking device in a wheel well of her car in order to track her whereabouts.

The other plaintiff said her ex-husband put the AirTag in her child’s backpack.

“Ms. Doe continues to fear for her safety — at the very least, her stalker has shown a commitment to continue using AirTags to track, harass, and threaten her, and continues to use AirTags to find Plaintiff’s location,” the lawsuit states. He saidAccording to CNN.

“[She] seeks to have this action lifted anonymously due to the real risk that his identification would put her at increased risk of harassment and/or physical harm.”

Apple did not immediately respond to a request for comment.

The device, which retails for about $30, is about a quarter the size and is used to track everything from car keys to electronics and anything of value that could be misplaced.

Devices use a Bluetooth connection to send their location to Apple devices through the Find My app.

Earlier this year, Apple He said that it has been working with safety groups and law enforcement agencies to develop ideas for making its devices safer for women and those at risk of prosecution.

But the company’s “solution” leaves much to be desired.

“In an upcoming software update, every user who sets up their AirTag for the first time will see a message that clearly states that the AirTag is intended to track their private property, and that using an AirTag to track people without consent is an offense in many regions around the world,” the company said.

It seems someone is willing to go to such lengths to surreptitiously track someone who probably won’t be dissuaded by a gentle reminder that their activity is illegal.

The company also said that the AirTag is designed to be discovered by potential victims and that law enforcement can request identifying information from Apple about the owner of the AirTag.

EU steps up WTO case against China over patents, Lithuania By Reuters